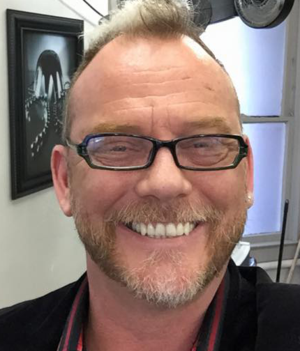 Rodney has done hair professionally for 24 years — although he started even earlier, honing his skills on his friends and family. After attending the Fay Stacey program in Ogden, Utah, Rodney moved to Salt Lake City for two years and then to Seattle where he returned to school and attended the Gene Juarez Academy of Beauty.

Even as a student, classmates were asking Rodney for help. That convinced him that he had found his true calling and he has been a stylist and teacher ever since. After receiving his teaching credentials in coloring, cutting and nails from the Gene Juarez Advanced Training Center, he then taught there for two years. The next 10 years were spent at the James Alan Salon and soon after, Rodney became a Sebastian Advocate traveling to Mexico, Hawaii, and California while working with leading stylists from all over the world. It was a glamorous and exciting time but Rodney decided to come back to Seattle to manage the Patrick Bear Salon on Capitol Hill for several years. Rodney then went to Studio 2602 in Belltown, where he worked for 5 years.  Most recently, Rodney has been in Capitol Hill at Salon Swagger, where he had the privilege to work with a great team of stylists.  While it was difficult to leave such a great salon, Rodney could not resist the opportunity to open his own salon in Capitol Hill.